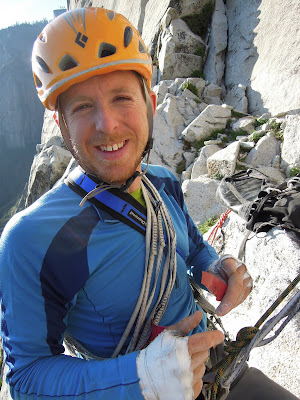 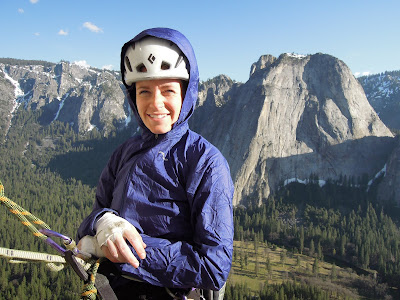 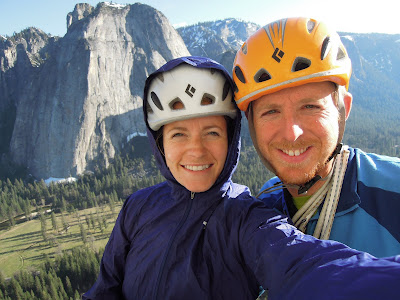 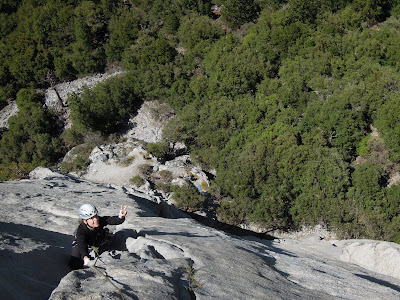 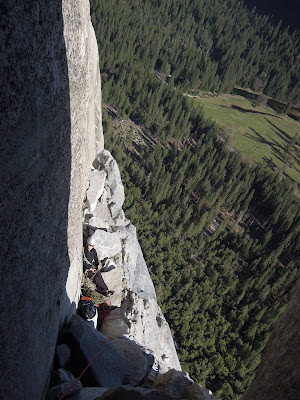 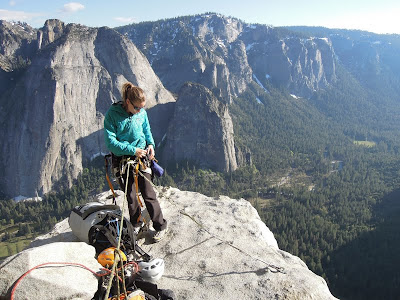 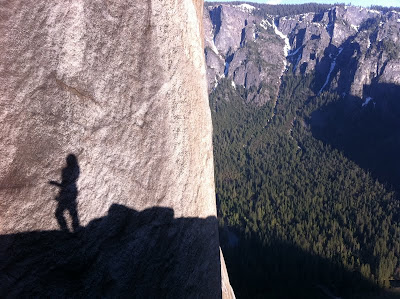 Tommy and I headed up for our intended push up the Salathe the day after getting in the Valley.  There weren't any ropes fixed up to Heart Ledges, which meant we needed to haul up the Freeblast (the first 11 pitches of the route).  When we did this climb 2 years ago (my second multipitch climb over 3 pitches) it took us maybe 5 hours?  With hauling and both free climbing, it over doubled our time to 12 hours.  We decided to camp on Mammoth Terraces and get going the next day.  We had a leisurely morning and after some debating and thinking about what the day would look like with the heat and having to haul up to El Cap spire, we decided that this go would just be a hauling mission.  There were some fixed lines up to the top of the Hollow Flake and so we jugged and hauled our gear to that point and stashed it so we could come back after the weekend.

My mom came in for the weekend for my birthday and for Mother's Day.  We got to do fun things around the Valley like hike up The Mist Trail, have a nice dinner at Yosemite Lodge, take her climbing at Swan Slabs (her first real outdoor climbing and mine and Tommy's first time at the slabs), we did a trail run and some more climbing.  It was a nice relaxing weekend and it's always fun to share the Valley with someone.
Tommy and I are taking a rest day today in the rain and hoping there are fixed lines up to Heart Ledges now (we think we saw some when we were at Pine Line yesterday) to haul up a little extra food, and then tomorrow our goal is to wake up early and free climb all the way to El Cap Spire (20 pitches up)!!  This is going to be a HUGE day for me, but I'm excited to be able to just go for it and not spend most of the day hauling.  I realize the appeal now of going light and fast.  Brilliant.  Wish me luck.
Curry Lounge's wifi is slower than a snail - photos to come later!
Posted by Becca at 12:31 PM 1 comment:

Tommy is a professional rock climber, I take photos and keep Tommy and Fitz alive and well, and Fitz just might be the cutest kid ever (totally unbiased opinion). Tommy and I met at the end of 2010. We became fast friends and after 6 months of friendship he invited me to his favorite playground, Yosemite National Park and revealed to me that I “intoxicated” him (what a romantic). We knew there was something special between us after 10 pitches of climbing up The Freeblast on El Capitan. Just 13 months later we vowed to be each other’s forever and life hasn’t slowed down since. We’ve been bouldering in South Africa, crack climbing in Indian Creek, big walling on El Capitan, exploring unclimbed domes in China, been blown around down in Patagonia, and wandered around Europe. Our biggest trip yet has been adding our son to the mix. Fitz was born April 7, 2013 and has been dragged along on our somewhat unconventional journey. We hope to instill in him a love for adventure and life and open his mind to the world around us. Follow along with us as we navigate making our own path through life.
For Tommy's website: www.tommycaldwell.com